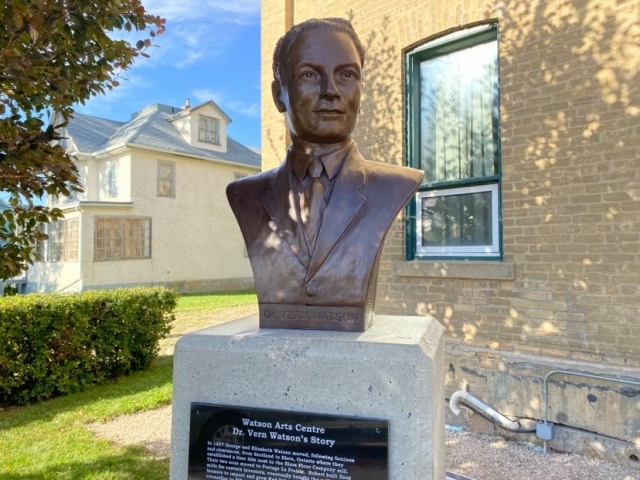 There was an unveiling ceremony for a bronze bust of Dr. Vernon L. Watson outside of the Watson Art Centre on Thursday.

Deputy City Manager Lisa Gaudet says there were many people in attendance.

“Deputy Mayor Christian Laughland gave some opening remarks, MLA Brad Michaleski was attending, Yvonne Lilly the President of the Dauphin and District Allied Arts Council, we had Johnny Pacey providing music for the event, and Dr. Roger Watson - Dr. Vernon L. Watson’s son flew in from Calgary was in attendance with his son.”

Lisa adds that it was a pleasure to meet Dr. Roger Watson.

“He was a dentist, and I think he was on town council for a while. He founded the Dauphin and District Allied Arts Council 1972 and kind of took over the building from the city. It was City Hall for a while and I think it was going to get torn down. He kept it and made it into the arts facility that it is today.”

Yvonne Lilly, President of the Dauphin and District Allied Arts Council says this event was a joint organization with the City.

“Roger had the idea, the city was really excited about doing it, the bust of it that he got made was by the same person who did all of the other ones in town here.”

The bust was cast by Studio West in Cochrane, Alberta.