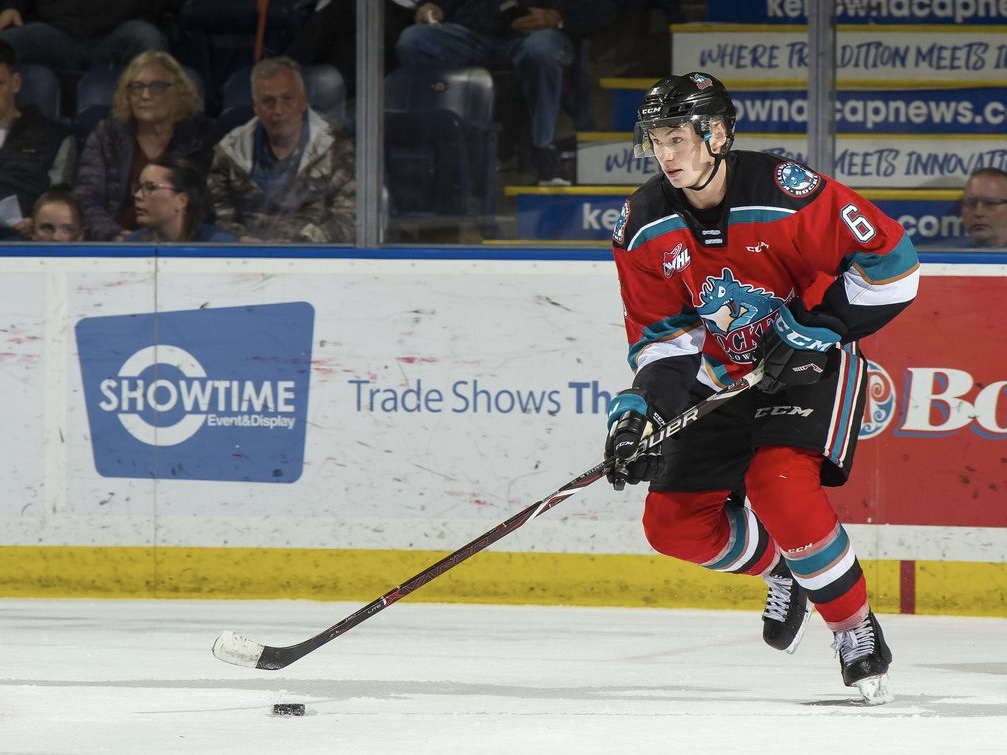 Kaedan Korczak was born and he grew up in Yorkton and that's where he played his minor hockey. As he continued to grow and hone his skills, Korczak made his Western Hockey League debut with the Kelowna Rockets in the 2016-2017 season where he played four regular-season games and another five playoff contests.

Now for the past three full seasons, Korczak has called Kelowna his home throughout the winter months, a home that is more than 1500 kilometres away from his childhood home.

In his first full season with the prestigious WHL Club, the Yorkton native posted four goals and 16 assists in the 2017-2018 season and he had another 33 points the season after. Returning to Kelowna bigger and stronger this past season, Korczak enjoyed a career year. It offered up 11 goals and 38 assists for a 49 point total, 16 more than the previous season.

"I think confidence is a big thing to having success," said Korczak. "I came into this past year with a mindset that I could do some pretty decent things offensively and I think I did that."

Korczak says he's quite pleased with how this past season went.

"We still had about a handful of games to go when everything was shut down so I feel I would have added some more points but there's nothing you can do about that," he added.

Back at the 2019 NHL Draft, Korczak was eligible to be selected and he expected to be as well. That expectation became a reality thanks to the Vegas Golden Knights. With the 41st overall pick in the second round, Vegas drafted Kaeden. Korczak's next goal was to sign his first contract and on December 21, 2019, the Yorkton native officially signed on the dotted line.

"Getting drafted was a pretty special feeling, I think every kid grows up wanting to be drafted," said Korczak. "When I signed that contract, it was a huge moment for my family and me."

Korczak signed after he took part in the 2019 Anaheim Ducks Rookie Faceoff presented by McDonald's.

So Korczak's hockey journey has taken him to an NHL rookie tournament and Kelowna to play in the Western Hockey League, but that's not it. Korczak played for Team Canada Black at the 2017 World Under 17 Hockey Challenge where the team came up short of making the semi-finals.

Back with Team Canada at the 2019 IIHF U18 World Championships, Kaeden had one more point in seven games. The team lost in the United States in the third-place game.

Making both of those teams followed selection camps and now, the Yorkton native will take part in another, although it will be different than years past. Korczak is one of 41 players that have been invited to Hockey Canada's virtual National Junior Team Sport Chek Summer Development Camp, which is set for July 27-31. The camp includes the likes of Alexis Lafrenière, Dylan Cozens, and Bowen Byram, just to name a few.

This is the initial camp leading up to the 2020 World Junior Hockey Championships that begin on Boxing Day in both Edmonton and Red Deer.

"That's definitely a huge honour. Anytime you can represent your country on an international level is something you take pride in," concluded Korczak. "If I had that chance starting on December 26, it would mean everything to me. I know it's a long and tough process, we'll just see how it goes."

Kaeden is set to return to Kelowna in late August.