Anna Garnett is all sports and of course, studying means a lot to her as well. Those reasons are why Garnett, from Russell, has been recognized by McDonald's of Manitoba and the Manitoba High School Athletic Association.

We'll get more to that below, first, however, we'll take a look at Garnett's high school days at Major Pratt as she has officially finished off what was a very successful and rewarding four years.

Whether it was playing hockey and basketball in the winter or baseball and running on the cross-country team in the summer, Garnett was front and centre. Many athletes have a favourite sport; however, that's not the case for the Russell native. She says whatever sport she's playing at the time is her favourite and it just changes depending on what season it is.

"I made so many great friends through playing sports, they're such a big part of my life and I love that," said Garnett. "Playing sports is also a good distraction for me, it allows me to take a break from what's going on with my studies and stuff like that."

At the 2017 varsity girls’ volleyball provincials, Garnett helped the Trojans to a fourth-place finish as they narrowly lost to the Warren Wildcats in the third-place game. 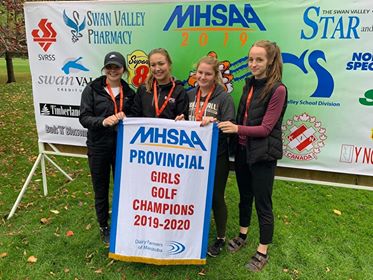 Back at it the next year, Garnett and the rest of the team would improve their previous season result as they finished in second at the provincials. They would once again come up short against Warren in what turned out to be a three-set thriller to determine a provincial champion.

Switching sports now and heading to the links. Playing on the high school golf team, Major Pratt took part in the provincials at the Swan River Golf & Country Club back on September 20, 2019. Garnett teamed up with Summer Fuz, Alana Sawaryn, and Clara Peak. The four girls combined for a score of 323 as they won the provincial title by 12 strokes.

"To win that gold medal was amazing, that felt incredible," continued Garnett. "Also that silver medal, it just means a lot. It was also extremely special to share that medal with my teammates; we all worked so hard to achieve success."

Garnett says some of the best parts of taking part in high school sports is spending time in hotels with her teammates and forming a very strong bond. So we talk a lot about how much success Anna has enjoyed athletically, but that's not the only place that she's done great things. A grade 12 student who has graduated, Garnett had a 95% academic average. She's an athlete, but at the end of the day, she's also a student.

"I was always pretty good at managing my time and it has really helped through my high school years,” added Garnett.

And now thanks to all of her efforts athletically and academically, Garnett has been rewarded by the province. She is one of 16 student-athletes that were rewarded a 2020 McDonald's Leadership Award that comes with a $1000 scholarship towards her post-secondary studies.

Those studies will take place in the fall in Calgary as she will attend the University of Calgary, home of the Dinos. Anna took part in volleyball nationals in Calgary before, but she's never lived in a city with a population of just under 1.4 million in 2019.

"I fell in love with the city when I visited there, it's got a great vibe," concluded Garnett. "I'm really looking forward to moving and just making a ton of new great friends and memories along the way."

Anna adds that she'll take part in any intramural sport that she can. She will take a Bachelor of Science.