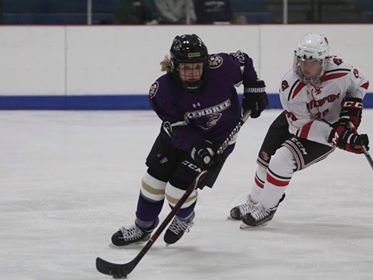 Juliana Davis played her U18 hockey days with the Yellowhead Chiefs. In the 2017-2018 season, she scored five goals and added three assists. In the next season, Davis really showed what she could do when she scored 12 times and she had four more assists in 37 games.

After the 2018-2019 season, Davis, from Onanole, expected her competitive days to come to an end. She had planned to attend the University of Manitoba where she would play in a women's league.

There's a saying that people are watching even when you don't think they are and that was the exact case for the Onanole native. Derek Pallardy of the McKendree University Bearcats just outside of St. Louis was watching Davis throughout the season.

A member of the American Collegiate Hockey Conference Division 1, the Bearcats were looking for a solid forward to add to their program in time for the 2019-2020 campaign and Juliana was exactly what they needed.

So, Davis' plans changed and she moved to Lebanon, Illinois, a town with a population of just more than 4000.

"I had my eyes set on heading to Winnipeg my entire grade 12 year, that was my plan," said Davis. "I got an email from Derek and it completely shocked me, I really didn't expect it."

Davis adds that her mom and she visited the campus and she instantly fell in love. From Onanole, Davis really enjoyed the fact that Lebanon is a small place, but it still offered her everything she needed.

"I always wanted to move far away from home after my high school days. I originally had a plan to move to Alberta, but those plans fell through," continued Davis. "Moving to Lebanon and joining the Bearcats was the perfect situation for me. I really couldn't have asked for any more."

Season one and year one is now in the books for Juliana. As the team played to a 15-12-1 record, Davis scored four times and she added seven assists in her rookie campaign. The 11 points were tied for the ninth most on the team.

"I made a ton of great friends and the coach was phenomenal, he was very supportive," continued Davis. "There were also a lot of Canadians on our team, so it was easy to relate to them."

Since she was a young girl, Davis always dreamed of playing hockey at the next level. Even as she jumped up the ranks through the AAA level, she still didn't believe she had it in her. However, she sure did and now, she's getting ready for season and year number two in the fall.