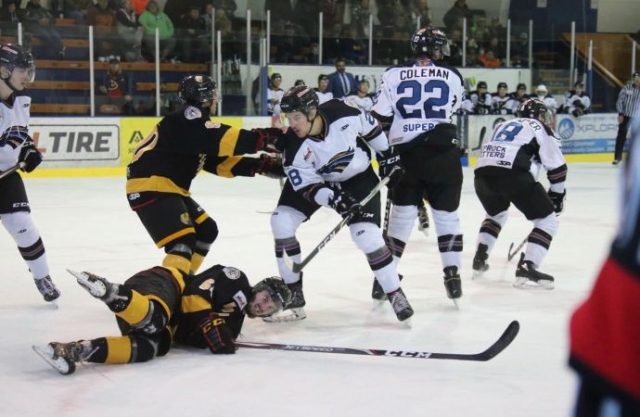 After graduating several of their top players from last year's league final run, the Swan Valley Stampeders aren't being affected what-so-ever early in the season. The club has skated out to a 7-1 record and they're in second place. The 14 points are just two behind Portage who is in first place in the league.

Each week, the Canadian Junior Hockey League (CJHL) announces its Top-20 teams in the country. The Penticton Vees top the rankings. 10 spots behind them at number 11 is where you'll find the Swan Valley Stampeders. They are joined by the Portage Terriers were are ranked as the third best team in the nation.

"To be honest it was a little bit of a surprise. We're so early in the season, we certainly don't see ourselves as better than anyone else," said Geoff Grimwood, head coach, and general manager. "We've been fortunate to get off to a good start here. There are a lot of good teams in this league, but a bit of recognition for the program is never a bad thing."

"I kind of chuckle about it, though honestly. Who's to say who is the best team in the country," he continued. "We certainly don't dismiss it, but it's far too early. If we have one bad week, we could go way down, it's just one of those things. At the end of the day, it's a tip of the cap to our team so far."

Of their eight games, Swan Valley has played eight home contests. Keep in mind, one of those was at the MJHL Showcase. Their home record is 8-0 and they've outscored opponents 26-to-13. Besides Portage, Swan Valley is the only undefeated team on home ice.

The team lost their second game against Dauphin. Since they've rallied off six straight wins. In those six contests, they have 23 goals.

"The one thing that we like is we're getting contributions from everyone. On Friday against Neepawa we got three goals from our third and fourth lines," added Grimwood. "On Sunday night we got a tying goal late from our third line."

"Whether it's our veterans or young guys, everyone is chipping in and I think that will help us moving forward." continued Grimwood.

Swan Valley is back on the ice for a trio of games this weekend on the road. They're in Steinbach on Friday, Selkirk on Saturday, and Portage on Sunday. Steinbach is 5-2-1, Selkirk is 4-4 and Portage is a perfect 8-0.

Speaking of Friday's game, in particular, Swan Valley has a lot of recent history against Steinbach. Two seasons ago they were bounced in the playoffs by them. Last season, they took out Steinbach en route to making the league final.

"We're really looking forward to the weekend. We've been fortunate to get some wins on home ice because we've had a heavy home schedule so far," said Grimwood. "We know no game this weekend or season is going to be easy."

With all the good, Swan Valley does have some things to sharpen up. They've taken 147 penalty minutes which are sixth in the league.

"We almost feel like we haven't even started, we have a lot of things to work on," concluded Grimwood. "One thing is definitely our penalties. We're giving too many teams chances on the power play and that's difficult on us. Our penalty kill has been very solid, but it stresses our players more often. Our number one focus is getting our penalty numbers down and with that, we hope that helps in some other areas as well."

The next Parkland battle is October 30 in Swan River.